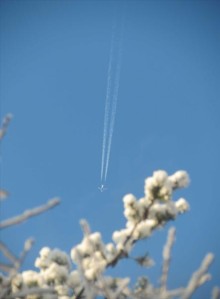 Some people have a Bucket List. Some people have an anti-Bucket List. This has never been so cut-and-dried for me. Certainly there have always been those (obvious) things I never intend to do: murder anyone, jump off a tall building, and so forth, but most people wouldn’t even consider such things for either list.

Instead, there are activities that once seemed attractive to me, but, through actual experience (mine or observed), repel rather than fascinate me. Let me describe some of these items that are OTL (“off the list”).

1. Own a gun, or even learn to shoot a gun. When I was young, in middle school, my older brother was given a single-shot rifle. There were poisonous snakes on our large property, which we saw not infrequently, and it seemed like a good idea. Also, it was common for teenaged boys to own guns for hunting turkey and deer (which he never did). Besides occasional target practice, he did use it to kill a large copperhead snake and a small bat. There were quite a few rabbits on our property that considered our gardens as their personal salad plates. One day I decided that I could do something about that and took that rifle up the hill to get a rabbit. I managed to shoot a fine rabbit right through an ear, but didn’t kill it immediately. Of course, it ran off. Days later, I found it lying in the weeds, dead. Apparently I managed to wound it enough that it died slowly and painfully. I buried the small corpse and never touched a gun again. I won’t have one in our house.

2. Re-visit Mexico. If you have read my post L’estomac de PLOMB, you already understand how I feel about Mexico. I will give almost any other country a first chance before I give Mexico a second chance.

3. Parasail. I have watched parasailers as I walk along the beach, and they are beautiful, soaring high in the sky above the blue waves. For many years, I thought that sometime I would get the courage to try this sport. Then, in a summer in the early 20-teens, we were on a cruise ship that stopped one day in St. Thomas. We went off the ship on a snorkeling excursion. On the way back to the ship, we were caught in a freak storm and took refuge in Senor Frog’s across the pier from our ship. (There are definitely worse places to be caught than Senor Frog’s.) Finally getting back on board, still soaked, just before the final boarding call, we dried off and went to dinner. And waited for the ship to cast off. After several announcements paging cruisers that were apparently late returning, the ship departed two hours late. The next day we learned that the missing cruisers (a mother celebrating her 60th birthday and her daughter) had been parasailing when the freak storm came up and fell 400 feet to the surface, the mother dying instantly and the daughter (the last we heard) still in a coma. I do not intend ever to parasail.

4. Scuba dive. I grew up outside a small town. Our town did not have a swimming pool. The first time I entered a swimming pool was as a freshman in college, when swimming was a mandatory class. After almost drowning in this class, I audited the class again and was finally able to float and turn over without sinking. Eventually I graduated to the doggy paddle and then to actual strokes. Years later, I took scuba classes and acquired the requisite wet suit (even boots, gloves, and hood), fins, weights, mask, and snorkel. I passed the dive test in a frigid, silt-filled rock quarry in Lancaster, PA. I never bothered to pick up the C-card that I earned that day. Once in a while, on vacation, I will venture out to snorkel, but never happily and never for long. Yes, I have seen beautiful things underwater. But I know my limits and when to stop pushing them.

5. Pilot an airplane. I grew up in the country directly under a jet route. Lying on my back looking up, or just glancing up, I saw these wonderful airplanes only as contrails or tiny silver specks high above me. Where were they going? Who was inside? How did they stay up there without falling from the sky? And would I ever be inside one? When I was in high school, we would sometimes drive to the small airport 40 miles away and watch one of the few airplanes take off or land. Once we even bought a roasted chicken and fresh loaf of bread at a grocery store neaby and had a picnic while watching. Fast-forward about 20 years. I had a job in research and development that required a knowledge of flying. Our company provided ground school classes as a prerequisite to flight lessons that could lead to a pilot’s license. I completed ground school and gained a greater appreciation for airplanes and their pilots. But I had no desire to be responsible for the lives of passengers and a realistic self-assessment of my (in)ability to do so. The closest I ever got to piloting was as a simpilot (simulation pilot) responding to air traffic controllers in an experimental setting. And that is just fine by me.

Probably there will be additions to this list in the future, but it will do for now.