This is our entry in Dutch goes the Photo!’s Tuesday Photo Challenge – Animals.

Because we live near woods, we get many animal visitors. For a few years, we have encouraged birds with food, water, and houses.  Squirrels like to share the birds’ bounty, so we have also provided food in their own feeder, while discouraging their visits to bird feeders. it’s very hard to discourage a squirrel. We have found three methods that work well enough:

The last method was put to a serious test last month.  We had placed suet cakes on a shepherd’s crook, to divert our many woodpecker visitors from drilling into our house.  We also placed a squirrel baffle on the staff.   The baffle did prevent squirrels from running up the staff to the suet. Unfortunately, the staff was placed about four feet from a bird bath, and the squirrels soon learned to leap to the top of the bird bath before leaping to the suet.  In fact, they used the top of the baffle as seating while they feasted on the suet.

We moved the staff farther away. The squirrels easily made the 6-foot leap from the bird bath to the new location.

We moved the staff even farther away from the bird bath. While the staff was now out of reach of the bird bath, the squirrels found a new launching point and amazed us with 7-foot leaps. The series of images below captures the acrobatics of that flying squirrel circus. (Click to enlarge.) 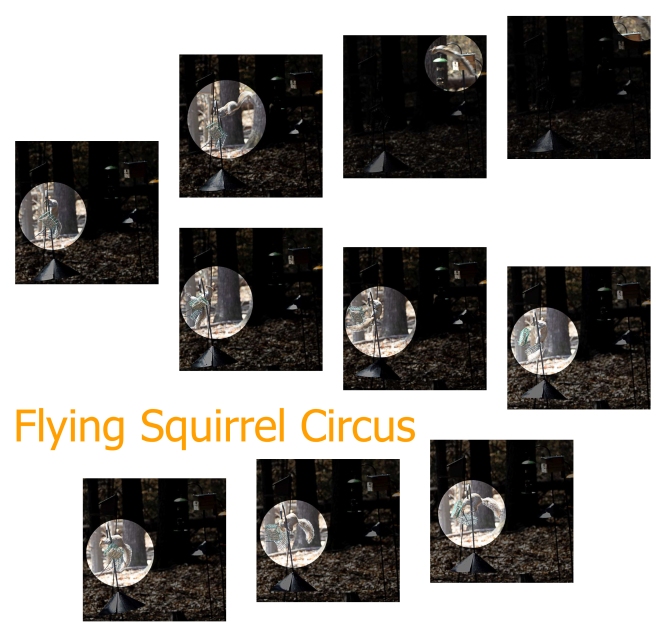 Postscript: We moved the staff even farther away and the squirrels have not attempted the resulting 10-foot leap.