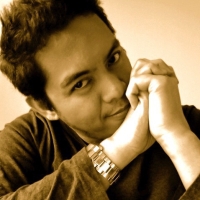 This is our entry in Dutch goes the Photo!’s Tuesday Photo Challenge – RGB.

This photo was taken while experimenting with the additive properties of light for a photography class project.  The objects photographed were one small black circle made of cardstock and several white cardstock circles (small, medium, and large), plus a string of blue LED lights.

(A fun exercise is to deconstruct the three arrangements of objects used, by using the color addition formulas: green+red=yellow, green+blue=cyan, blue+red=magenta.)

The blue from the light string added color and increased intensity to the otherwise solid colors. Because the lights are closer to the lens and moving, this part of the image is not as in focus as the circles. The glow from the blue LED light string does not seem to be combining with the color of the circles as expected. For example, the glow on the red circle is not magenta. This could be because the camera is photographing a solid object (the light string), rather than recording colored light.

This photo was taken on August 1, 2016. The room was in almost complete darkness and the camera was on a tripod. Specs are: