We have always been fascinated by Ferris wheels, so it is no surprise that we admired (and photographed) the Budapest Eye from many angles before (and after) we rode it.  The Budapest Eye — also known as the Sziget Eye — towers 65 meters high over Erzsébet Square.  Only St. Stephen’s Basilica (and the Budapest Parliament Building) are taller at 96 meters.

The first photo was taken from Gellért Hill on the evening we arrived in Budapest.  Saint Stephen’s Basilica is the imposing building behind it.  We had hiked partway down from the 140 meter peak of Gellért Hill, which rises above the Danube River. The 25 second exposure captures the rotation of the wheel. 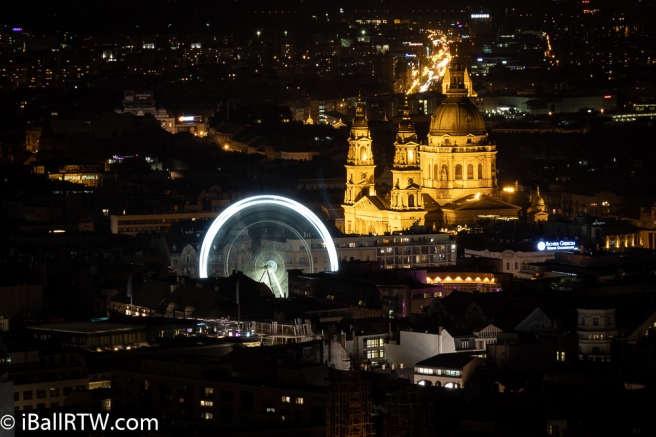 The Budapest Eye from Gellért Hill

The second photo was taken as we stood in line for our ride just after sunset. At 2700 Hungarian Forint (HUF) per ride, slightly more than $9 USD, for a minimum of three rotations or 8 – 10 minutes, it is a pricey thrill, but worth it.  Calculating from time stamps on our photos, we rode for at least 15 minutes.

In Line for the Budapest Eye

The third photo was taken from directly beneath the arc of 42 cabins on the wheel.  Each cabin is sized for four to six people.

Beneath the Budapest Eye

This post is our entry in nancy merrill photography’s A Photo a Week Challenge: Three of a Kind and Dutch goes the Photo!’s Tuesday Photo Challenge – Wheel.

9 thoughts on “The Budapest Eye”